Double D - Only Black and White - Entry #2 - Friending While Drinking

Hello, Crafty Makers!
My second submission to the Double D Challenge:
"Only Black and White" is a true child of serendipity!  I was playing around with my new edge dies and after I made the cut, I realized that I should have turned the die the other way to get the effect I wanted.
~~~~
Friending While Drinking 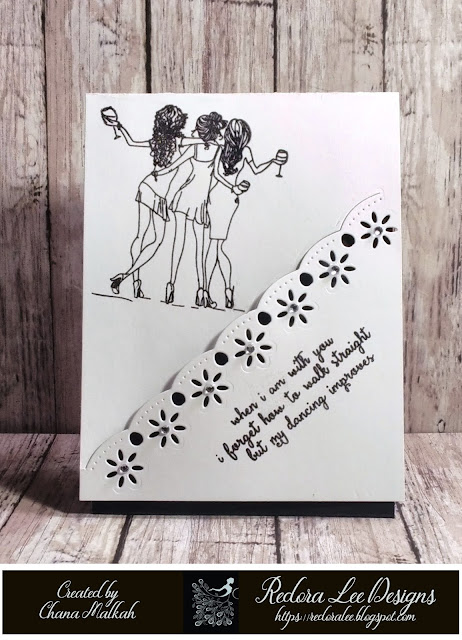 I decided to use a piece of black cardstock as backing and I cut it slightly longer than the base to form a lip.  It would have been more impactful if  I had embossed the die cut but I wasn't even sure this would actually end up as a project.  However, once I saw how pretty and understated this presentation was, I realized the embossing would have been a nice touch.
I added my stamp and sentiment, both of which were stamped with black ink and then embossed with clear embossing powder.  I am so proud of me because I resisted the urge to put the ladies in little black dresses.  The only embellishment is the addition of the small rhinestones in the center of my florets. 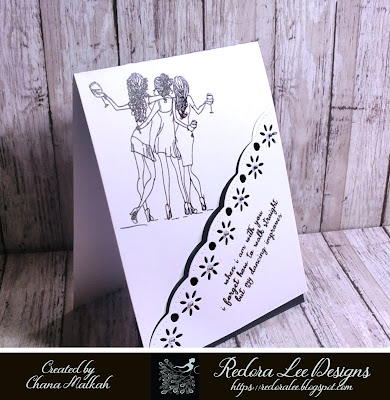 From the side, you get a peek-a-boo glimpse of the black layer.
I like these types of challenges because you are forced to focus more on composition and typography to make your design statement.

Thanks for stopping by!
Give this Double D Challenge a try!