The challenge at the Outlawz Greetings  this week is: Non-Traditional Christmas Colors!
I am Jewish, so  I created a Chanukah Tag instead.
Chanukah (which started at sundown on 12/16)
will end at sundown on December 24th.  We have very few one day observances.

Over 2100 years ago, the Land of Israel was dominated by the Seleucids (Syrian-Greeks) who sought to Hellenize the people of Israel. Against all odds, a small band of faithful Jews defeated one of the mightiest armies on earth, drove the Greeks from the land, reclaimed the Holy Temple in Jerusalem and rededicated it to the service of G-d.

Hoping to light the Temple's menorah, they found only a single cruse of olive oil that had escaped contamination by the Greeks; miraculously, this one-day supply burned for eight days, until new oil could be prepared under conditions of ritual purity. 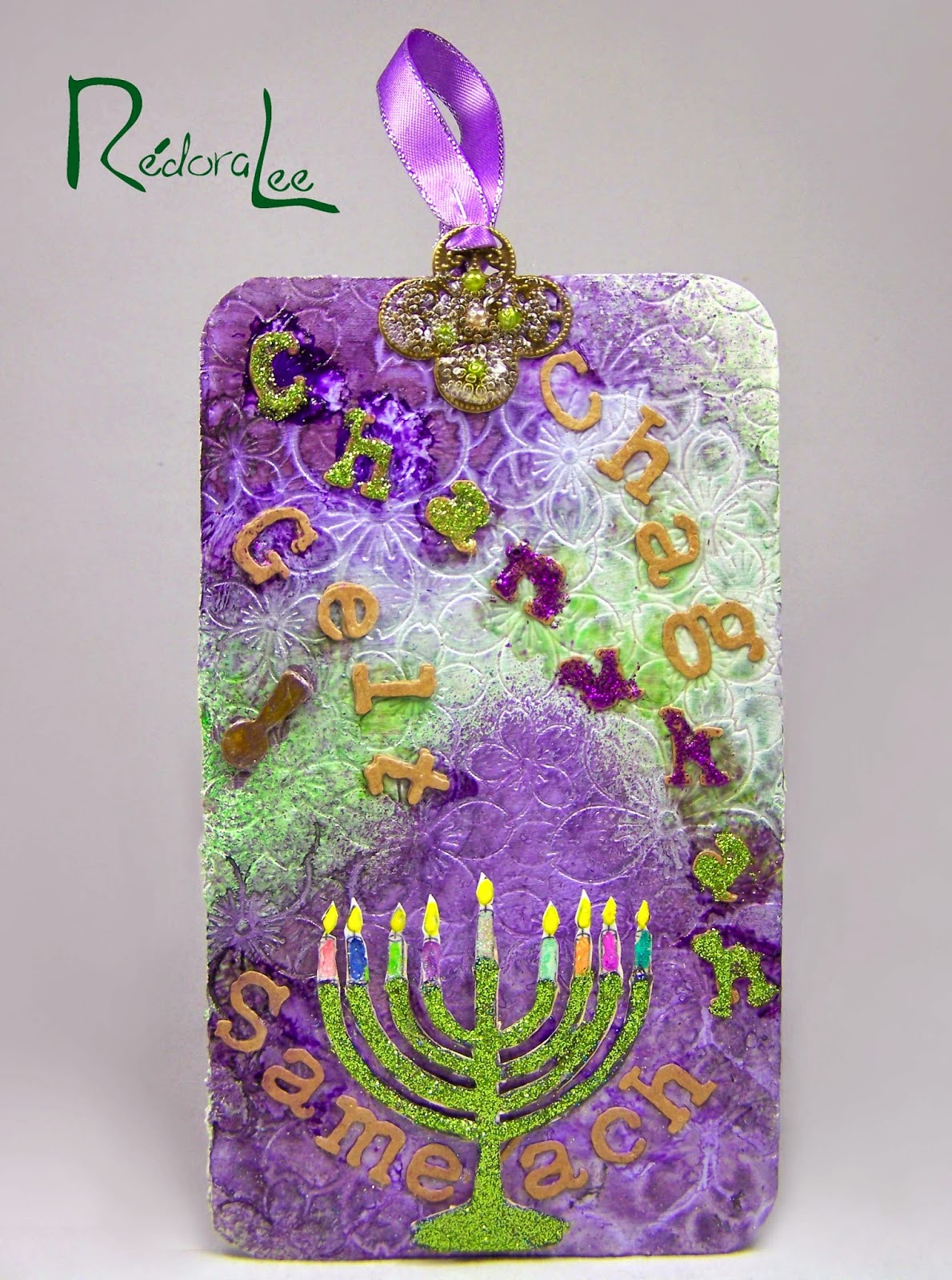 The Greeting on this tag is: Chag (Festival)  Sameach (Joyous)
To commemorate and publicize these miracles, the sages instituted the festival of Chanukah. At the heart of the festival is the nightly menorah lighting: a single flame on the first night, two on the second evening, and so on till the eighth night of Chanukah, when all eight lights are kindled. 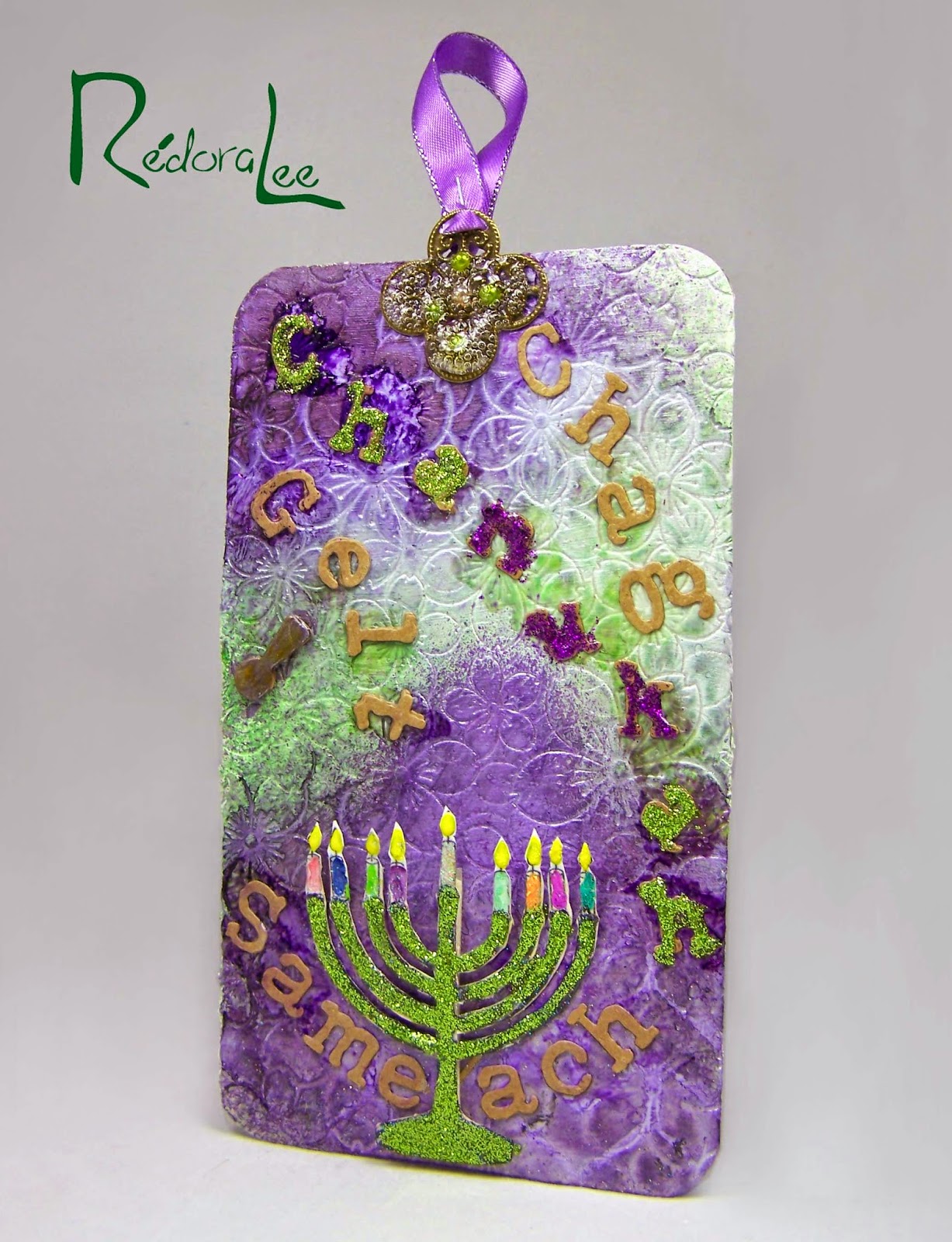 Menorah lighting was instituted to announce to the entire world that G-d makes miracles for those who stand up for truth and justice. The Chanukah lights can either be candle flames or oil-fueled. The eight candles of the menorah must be arranged in a straight, even line. The candles should burn for at least 30 minutes on weeknights, and up to one-and-a-half hours on Friday (Shabbat) evening.

The shamash - the "attendant" candle that is used to kindle the other lights -
sits a bit higher or lower than the other candles, on the ninth branch of the menorah.
Men and women alike are obligated to participate in the menorah lighting 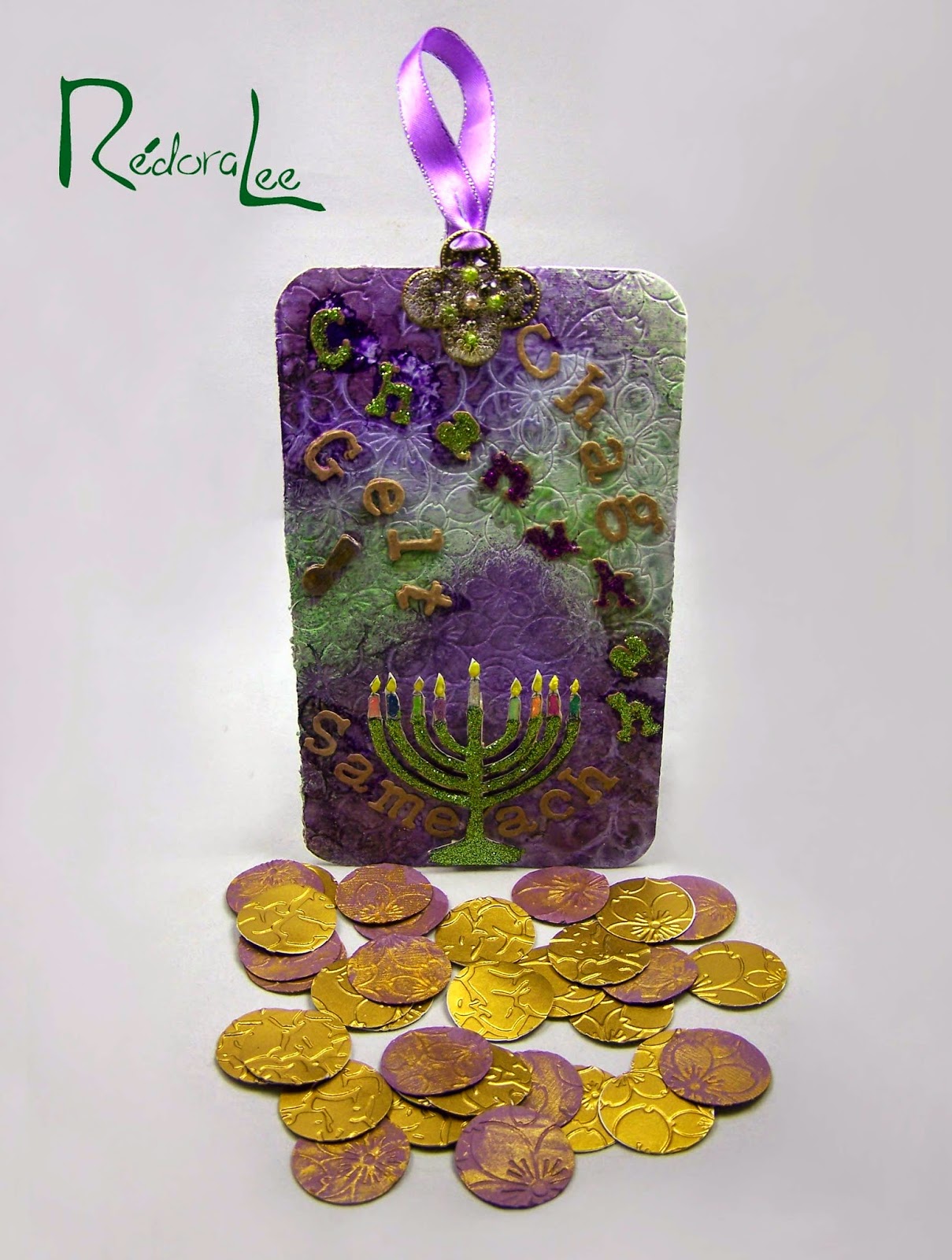 Since oil played a significant role in the Chanukah story, it is traditional to enjoy oily foods on this holiday. Among the most popular are potato latkes (pancakes) and sufganiot (deep-fried doughnuts)  It is also customary to play Chanukah dreidel (spinning top) a throwback to the times when the Greek armies of King Antiochus banned the study of Torah.
When the Syrian authorities were patrolling,
Jewish children would hide their books and play with their tops to deceive the enemy.
Our Chanukah dreidel games are a salute to these Jewish heroes of yore.
Drediel is often played with money or Chanukah Gelt. **
~~~~~~
I was so happy with the effect I achieved when I sprayed Perfect Pearls onto the tag.
It produced that silver shine you see in the recesses of the flowers;
the silver may look white on some computers.
And, of course, I had to have Chanukah Gelt.  I made some of them purple-gold.

Thanks for stopping by!
Hugz,
Chana Malkah
Yes, my name and Chanukah share the same Hebrew root. So it is pronounced HA NAH.
Chana = Highly Favored of G-d
Malkah = Queen